Like the original Charter of the Lodge, the Centenary Charter is entrusted for safekeeping into the hands of the Worshipful Master upon his Installation. The wording on the Centenay Charter is as follows:

“To the Worshipfull Master, Wardens, Other Officers and Members of the Albert Edward Lodge No 1714 and all others whom it may concern.

Whereas it appears by the Records of the Grand Lodge that on the 11th Day of June 1877 a Warrent of Constitution was granted to certain Brethren therein named, authorising and empowering them and their regular Successors to hold a Lodge of Free and Accepted Masons at the Duke of York Hotel, York Town in the County of Surrey, under the title or denomination of the 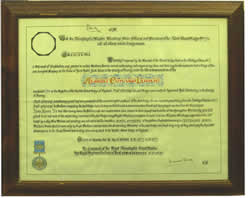 numbered 1714 on the Register of the Grand Lodge of England, And whereas the said Lodge now meets at Agincourt Hall, Camberley in the County of Surrey

By Command of the Most Worshipfull Grand Master

For further information relating to our Lodge Centenary, please see the history